Synergistic Research MiG SX footers are an evolution of their original MiG footers developed in 2008. They start with a new specially tuned MiG resonator forged from high carbon steel and add a precision-machined aircraft aluminum and carbon fibre three-piece chassis engineered to distribute vibration through a special tuning disc and a UEF tuning element into carbon tungsten ball bearings. For a bespoke match to your system, MiG SX has two placement options that re-tunes your component’s resonance; choose between Ambient and Pin-Point configurations and pick the option that best suits your system on a component by component basis.

With MiG SX in your system, you experience a more massive and dense sound field, improved imaging, better layering of images, deeper and tighter bass, more extended high frequencies, and better mid-range clarity. In short, MiG SX improves nearly every aspect of system performance in a way that is anything but subtle. Experience MiG SX in your system for 30-days risk-free with a money-back guarantee. At Kemp Elektroniks, we stand behind all Synergistic Research products and we are confident you will be blown away by MiG SX guaranteed or your money back! 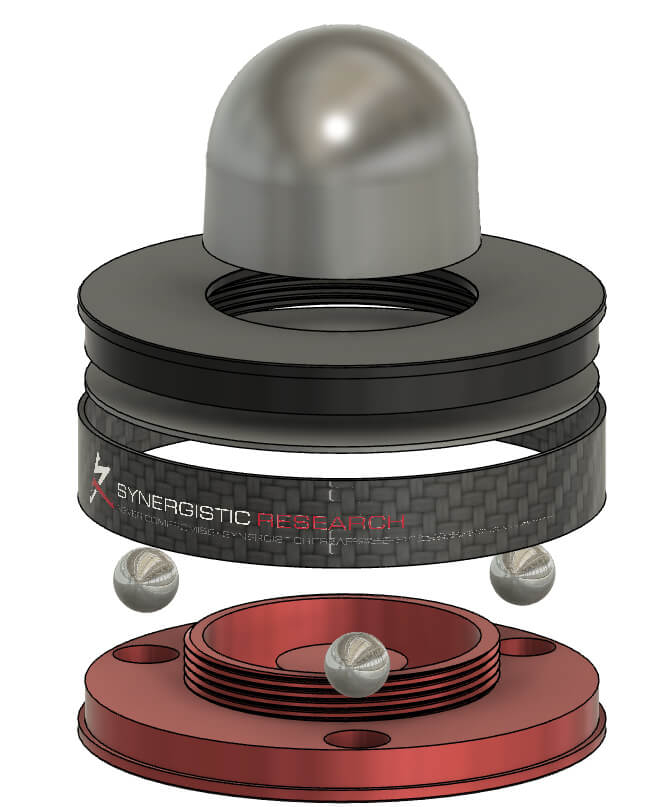 Design notes for the new MiG SX from the lead designer of Synergistic Research, Ted Denney: “I wanted to take my original MiG footers and evolve them to incorporate the same precise sound I hear when using the world’s most expensive precision-machined multi-component isolation footers. I also wanted to preserve what it is we all love about my original MiG’s, namely their expansive soundstage and their ability to custom voice the sound of each component in your system until a synergy is reached. This unique ability to custom voice components with MiGs has been a critical element to my success in getting 'Best Sound at Show' at trade shows like RMAF and Munich. To this end, I retuned the forged high carbon steel MiG resonator. We then developed a three-piece CNC machined aircraft aluminum and carbon fiber chassis for the transfer of mechanical vibration between the MiG and a special tuning disc, a UEF tuning element, and Carbon Tungsten bearings. These last three components were intentionally included so we could experiment with different materials until arriving at the correct balance of elements that would yield the best sound possible. For example, we experimented with precision bearings made from stainless steel, brass, aluminum, and carbon tungsten. To evaluate these different material options, we built MiG SX footers with different internal elements and compared them in double-blind listening tests in our reference system until we arrived at Carbon Tungsten ball bearings, which sounded best. Likewise, the tuning ring and UEF elements were altered between different materials and formulations until we arrived at just the right combination".

Ted Denney continues: "Interestingly we found soft tuning rings overdamped the sound of individual components in exactly the same way soft footers compress the soundstage and suck the life out of a system while different metals each had different audiable signatures with one in particular that was ultimately best suited to the overall sound of our new MiG SX. Had it not been for the ability to tune these independent elements within the MiG SX, we could never have arrived at the sound we did, nor would MiG SX be as refined and evolved as it is. It would have been impossible to design this new footer from concept to final product with its current level of performance on initial design theory alone. It was the ability to subjectively tune separate internal parts in different combinations that finally yielded a footer that combines the precise image focus and clarity of the world’s most expensive and complex machined designs while enhancing the strengths our already holographic and tunable MiG’s for the most versatile and balanced sound of any component footer without compromise”.

Write Your Own Review